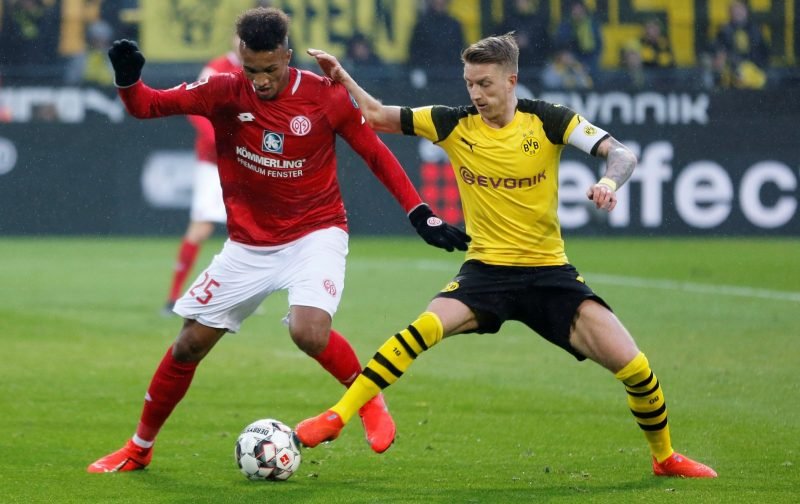 Everton Director of Football Marcel Brands must sign a centre-back before the transfer window closes, as Jean-Philippe Gbamin intends to form a part of Marco Silva’s midfield, as quotes by the Liverpool Echo.

Gbamin is capable of playing at centre-half if needs be, but his most often used position is in the defensive midfield role, and he intends to remain in the centre of the pitch following his arrival at Goodison Park.

The 23-year-old is not opposed to occupying a role in our backline, but told the media at his unveiling on Tuesday alongside Moise Kean: “I’ve come here to play in the midfield, as a defensive midfielder if you like.

“But if the manager wants me to do so, I can play in a number of positions. Whether it is in the number 8, the number 6 or defence, I will absolutely be ready for whatever position the coach needs me.”

Gbamin joined Everton for £25million from 1.FSV Mainz 05, but is not yet match fit having started his pre-season training later into the summer, after representing Ivory Coast at this summer’s Africa Cup of Nations.

He is now settling into life on Merseyside, but has effectively ruled himself out of playing a great role against Crystal Palace on Saturday.

“I’m concentrating on getting myself totally fit, this week might be a little bit too soon,” he added. “As I say, I’ve only had two training sessions [with Everton].

“A more realistic option might be the following game [at home to Watford on August 17].”

But before we face the Hornets, potentially with Abdoulaye Doucoure in our ranks as Marco Silva is seemingly pushing to sign the French midfielder, Brands must sign a new centre-back, as Gbamin’s comments cement the fact we have a void in our squad.

With Kurt Zouma unlikely to return to Goodison Park after his season on loan from Chelsea, we are set to begin the new Premier League campaign with just three senior centre-halves in the squad.

One of those, Mason Holgate, is far from ready to play a regular role in the top-flight, and Yerry Mina showed throughout his debut season that he is a flight risk when it comes to injuries.

If the Colombian is ruled out for any lengthy period, all our hard work this summer acquiring talents like Gbamin and Kean will be for nothing, as the foundations of our squad will be weakened, no matter how fierce the weaponry in our attack is.