‘Surely not’, ‘Incredible’ – Many Everton fans in stitches as former key figure lined up by Euro giant 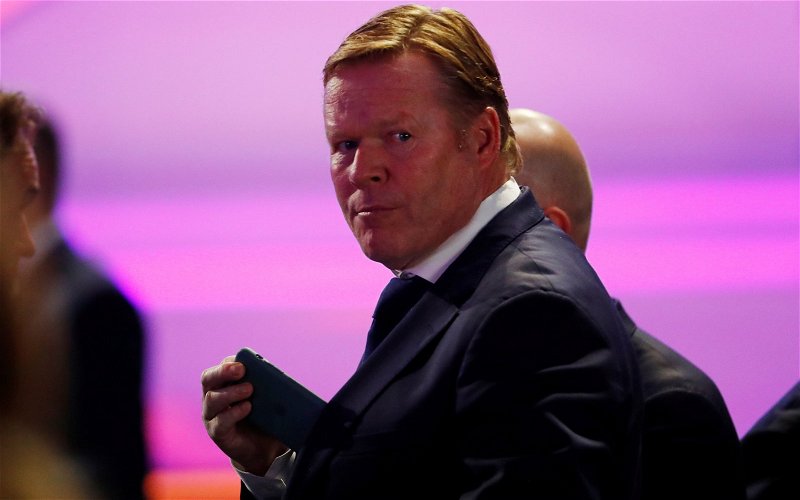 Many Everton fans have been left in stitches at reports FC Barcelona are lining up Netherlands head coach Ronald Koeman to replace Quique Setien after being thrashed 8-2 by Bayern Munich.

Setien’s days as the boss at the Camp Nou are over after Barcelona fell out of the Champions League to Bayern Munich in brutal fashion, with the Bundesliga champions dismantling the Catalan side’s backline with such ease on Friday night.

The loss made Setien’s position untenable despite President Josep Bartomeu previously backing him publicly after missing out on the La Liga title to rivals Real Madrid, leading to suggestions Koeman could return to the side for whom he once played.

Spanish TV broadcaster Movistar believe Koeman is the among the leading candidates to take up the challenge of replacing Setien, and claim the 57-year-old would now be open to the task having snubbed the opportunity in January following the departure of Ernesto Valverde.

Koeman turned down the opportunity in January due to his commitments with the Netherlands national side but would be expected to give a different answer if approached again.

Sky Sports have also tipped Koeman to be the frontrunner as the Dutchman is ‘the preferred choice’ of President Bartomeu.

Mauricio Pochettino, Laurent Blanc, Garcia Pimienta and Xavi are also under consideration as Barca would need to pay compensation to release Koeman from his Netherlands contract.

Everton fans cannot quite believe their former manager is being lined up to take charge of Barcelona, having been sacked after 16-months in charge following a run of just two wins in nine Premier League games that left the Blues 18th in the table.

As if things aren’t bad enough for them right now

Don’t Barcelona want to improve.I wouldnt have Koeman walking my dog as he would make it confused then lose it.

Worst manager in our history. A total joke.

Some Toffees supporters also feel Koeman taking charge at the Camp Nou could be a blessing for them, as the Dutchman could look to rejuvenate the La Liga outfit with a swoop for his former playmaker Gylfi Sigurdsson.

Koeman was at the helm as Sigurdsson completed his then-club-record £45million move from Swansea City.

Does he want to take his favourite player Sigurdsson