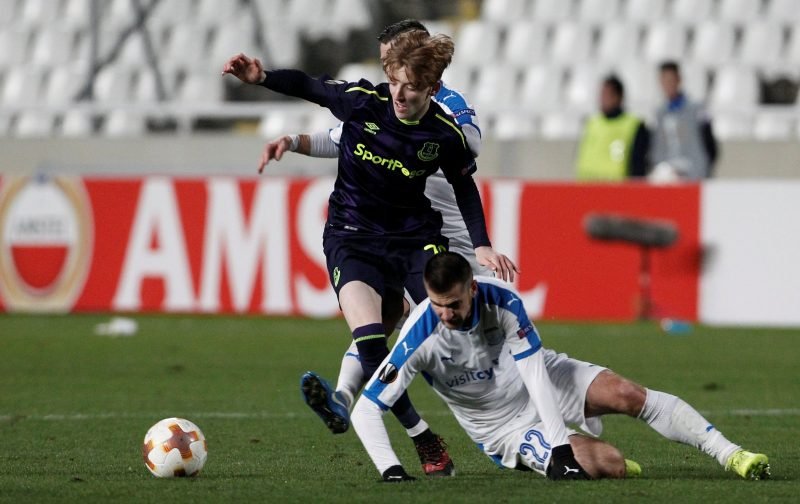 The EFL Trophy has been subject to much criticism in the past few years due to the introduction of Premier League youth sides to the competition, yet it is proving to be a good learning curve for youngsters amongst England’s elite.

And Everton are no exception, with the Blues’ U-21 side currently sitting top of Group E North after two games following a 2-0 win away to League One side Burton Albion, and for Anthony Gordon, it proved yet again to be a showcase match for the 18-year-old.

The teenager, who has been at Everton since the age of 11, was yet again at his creative and exciting best against the Brewers on Tuesday night, with Gordon assisting the first goal of the night with a well-weighted through-ball to Ellis Simms.

The opening 45 minute could have easily been dubbed ‘The Anthony Gordon Show’, with the creative attacker nearly scoring one of his won just before half-time with a well-driven effort on the edge of the area that was saved by Stephen Bywater as well as almost assisting Simms for a second goal after a mazy run into the area.

Indeed, it was yet another reason to add to Gordon’s ever-growing list as to why the teenager should be part of the first-team for this season as some fans duly noted on Twitter following his impressive performance against Burton…

Anthony Gordon is absolute class, I’d give him some minutes in the first team just to see what he can do

Anthony Gordon is 2x the player Walcott is

And Marco Silva should be considering handing Gordon a shot in the first-team this season, especially with the Toffees seemingly looking to go far in the League Cup with Everton handed a fairly winnable game in the fourth round against Watford.

With Gordon already hitting six goals and two assists in six games this season as numbers from Transfermarkt show, the versatile attacker could seemingly make the step-up to the first-team and test his promising abilities in the domestic competitions.

The teenager was once touted as U-23 manager David Unsworth as a prospect fans should be excited about via The Liverpool Echo, and Gordon is certainly delivering on that promise in the early days of the season.